When celebrating Worldwide Fur Free Friday, I felt I could not possibly ignore the plight of the long-tailed chinchilla. This little animal has become critically endangered because of man’s actions; a sordid story which can only serve to illustrate, once more, how man’s narcissism and greed has allowed him to put himself before the needs, and, even the most basic rights of, innocent, defenceless beings.

Today there are multitudes of chinchillas kept in captivity, either for the pet trade, for research (specifically the auditory system), or for the fur trade. And, all three are prospering. The fur trade, undoubtedly, being the most despicable of these.

All wild chinchilla species are listed in  Appendix 1 of CITES.  But, since these captive animals are considered domesticated, they are not protected by CITES provisions (a fact pointed out with tedious regularity by those selling furs on eBay). Furriers and farmers can, therefore, keep breeding, butchering and promoting the wearing of chinchilla as much as they wish. Many, with more money than conscience and compassion, can’t wait to adorn themselves in the poor creatures’ fur; so there is a very willing market waiting in the wings. A market which would far rather wear the chinchilla’s coat as a status symbol or fashion statement than see the rightful owner wearing it as a natural layer (or, one hundred and fifty rightful owners to be precise – that’s how many tiny chinchillas it takes to make a full-length coat). A coat can cost anything between ten thousand and one hundred thousand dollars, so it’s highly profitable.

Apart from depriving these little creatures of a normal life, what desperately needs to be remembered is that there is no easy, pain-free way to skin an animal alive! They are not shearing sheep here!

To quote the obviously caring Natalie Imbruglia, “There is no kind way to rip the skin off animals’ backs. Anyone who wears any fur

shares the blame for the torture and gruesome deaths of millions of animals each year.”

But, these particular animals have not all been taken from the wild. At least not directly. They are farmed from stock stolen from their natural habitat, mostly in times past. The international trade in chinchilla fur began in the 16th century. However, the chinchillas we see today are almost all descended from chinchillas taken from Chile in the 1800s and early 1900s. This was the cause of depletion, and, sadly, despite efforts, this depletion was so severe, the species has been unable to recover. In two centuries, of vanity and greed, over twenty-one million chinchillas have been taken from their homes; over seven million of these were exported between 1828 and 1916. At one stage they were being shipped from Chile at a rate five hundred thousand per annum. The devastation to the species was unimaginable.

In 1918, the government of Chile, (along with those of Peru and Bolivia) declared the trapping of animals and exportation of pelts illegal; ­ but, it was all too little, too late. Needless to say, this activity did not cease then, and has still not ceased today. Poaching in Chile persists. But, possibly due to much smaller populations now, they are not being taken in such large numbers.

Originally, chinchilla populations flourished within their range.  Now, it is the trade in the animals which thrives, as their pelts continue to be found amongst the most valuable in the world. As a result, these endearing little rodents are now facing extinction in the wild.

Chinchillas are small, just slightly larger than ground squirrels. They have strong legs and can leap around in a very agile manner. They have bushy tails, and soft, silky dense fur. As many as sixty hairs grow from one follicle. The fur was designed by nature to insulate the species against the cold of the barren mountain regions it inhabits. 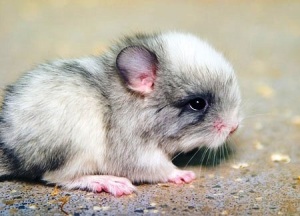 Chinchillas sit upright on their hind legs to eat, grasping their food in their front paws. They are social animals living in colonies of up to one hundred individuals (you can see by this how easy it must have been to capture them in large numbers). These colonies are properly referred to as herds, so named by the first fur farmers who treated them as livestock. And, just to add to that trivia; a female is called a velvet or sow, and a male is called either a bull or a boar.

Chinchillas are crepuscular and nocturnal, though they have been seen in broad daylight foraging for food. They sleep or rest in rock crevices and holes. They are expected to live up to ten years in the wild, but, can live to as much as twenty years in captivity.

Breeding takes place during May and November. The female will give birth to two litters a year.   The average gestation period lasts one hundred and eleven days,  after which, a litter of between one to three babies (known as kits) will be born. Kits are precocial at birth (fully furred and with eyes open) and weigh about thirty-five grams. They are usually weaned by sixty days.

From beasts we scorn as soulless,
In forest, field and den,
The cry goes up to witness
The soullessness of men.
M. Frida Hartley
(Animal Rights Activist)

Habitat
Barren, arid, rocky or sandy mountainous areas.
Where
Chile
What they eat
Plant leaves (mostly of the cactus family), fruits, seeds, and small insects.
Threats
Human activities; mainly poaching, followed by grazing of livestock, mining and firewood extraction. Their natural predators include birds of prey, skunks, cats, snakes and dogs.
Status: Critically Endangered
The long-tailed chinchilla (Chinchilla lanigera) is listed on the IUCN Red List of Threatened Species as Critically Endangered.
The Convention on International Trade of Endangered Species of Wild Fauna and Flora (CITES) lists all chinchilla species in Appendix 1, making international trade in the animals or their skins illegal among participating nations. Frighteningly, there are only 10,000 individuals thought to be left in the wild. There have been attempts to reintroduce chinchillas to the wild, but these have been markedly unsuccessful.
A great deal more could be done to monitor hunting in the remote mountain ranges of the Andes. However, this has proven to be a difficult place to patrol leaving the chinchillas vulnerable.