I would like to take a quick break from blogging about Endangered Species for a moment and thank two of my fellow bloggers for the new reviews of Mungai and the Goa Constrictor, which I have just discovered on Amazon.

My thanks first go to Peter Schreiner.  I am thrilled with this wonderful review by Peter, whose own website is a huge favourite of mine.  Peter, a staunch Vegan, writes beautiful, if not very sad, poetry about the suffering of animals at the hands of man.  For anyone who has not yet discovered Peter’s blog, Crow’s Head Soup , do have a look.  Peter is quite forthright in his views, and if you are animal lover you will love his work and most certainly agree with the sentiments of his poetry.

For the second fabulous review, my thanks go to Kandy Scaramuzzo, an ardent lover and rescuer of horses.  Kandy’s site can be found here at Kandy Kay Scaramuzzo where you can learn about the incredible Pie, who is now pushing forty and still, with lots of love and care, plodding around the paddocks at home in Texas.

Both reviews can be found here on Amazon

Wow – Another 5 star review for Mungai and the Goa Constrictor!

I have just been featured on the fantastic blog of my dear friend, author and artist Christine Corretti.  Not only that, Christine has posted the most amazing 5 star review of Mungai.

Please all go over to her blog and read.  There are loads of other great stuff to see too.  Well worth a visit!

The Chronicles of King Big Bear

I have just received the most spectacular in-depth review for Mungai and the Goa Constrictor. My heartfelt thanks to the very erudite Jane Whiteoak for taking so much time to write this review. I hope many of you will find the time and the irrepressible urge to read it.

Select a place..any where in the world and you most probably have heard stories about a pair to be very wary of, like Mungai and the Goa Constrictor! Likely, you’ll have heard them directly, from the innocent victims left strewn aside in their wake. This is a story about nature, reforestation, gold mining, animals both two-legged and four-legged and the most nebulous kind of all… that of the cold and calculating… psychological nature.
Mungai, escapes from a zoo by literally biting the hand that feeds him, to obtain his freedom. Along the way he connects with a self-centered, narcissistic snake named Goa. They instantly mirror and gravitate to the lack of conscience in each other and recognize “possibilities” of a greater future together. They exist in this world only to use everyone that they encounter to their own advantage. 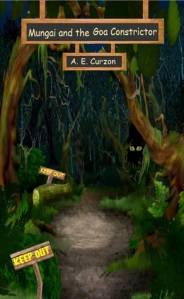 They formulate a plan to exploit a group of unsuspecting animals, promising great rewards in the future, if the animals do as they request.
Having every faith in the pair, the animals work laboriously constructing tables, chairs and baskets out of wood with the promise of hope and prosperity for their respective families. They listen attentively to Mungai and Goa, as the two speak with authority and are quite erudite in their knowledge of the woodland surroundings and little gold treasures. To doubt their sincerity would be erroneous as the animals would have a falling out with their peers and thus be made to look foolish.
Through manipulation and cajoling the two cause confusion every step of the way. The woodland and jungle animals work together in good faith but they are gullible and unbeknownst to them are being terribly misled. Their gold mining endeavours, are necessary to pay for new equipment, used by humans to work at deforestation!
They’ve all been told by the amoral pair, that the “trees are too old” and need to be chopped down, in order that new ones may be replanted in their place. The animals have no concept that they are working illegally and are actually chopping down their own habitat. The two ring leaders start to show a few cracks in their armour however, when they begin to live in loftier and loftier residences. Each move is scrupulously planned, to be farther away from the ‘workers’ each time and with every move they have obtained, through smooth talk, even greater security.( e.g. wolves acting as security guards).
Finally, a very observant crow, becomes extremely suspicious and tries in vain to alert the diligent trusting foreman, the badger. Of course, the badger doesn’t believe a word that the crow tells him, as he has complete and utter “misplaced” trust in Mungai and Goa.
The book is very engaging as one ponders, if this dubious duo will ever be seen for what and whom, they truly are. Amelia E. Curzon has done us all a huge favour, by shining a spotlight on and enlightening us, to the damage done to our society by these unconscionable and despicable human beings. Her insight into this behaviour and relaying this message, through the depiction of animals is truly remarkable. This is an excellent book that would be advantageous and fascinating to read, for all ages. It is a real page turner and I highly recommend this book to all!

Read all other reviews here