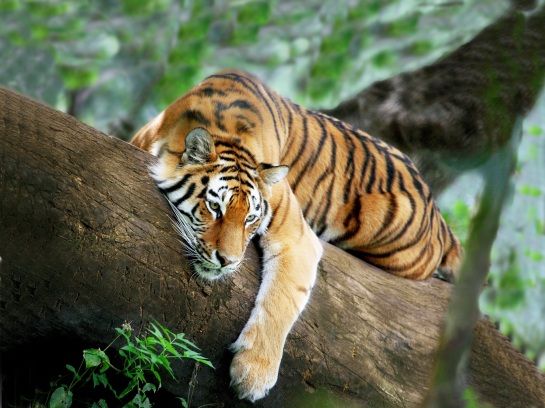 Description
One of the most persecuted creatures on the planet,  the Bengal tiger is also one of the most beautiful.  But greed and misguided myths are pushing the species to the brink of extinction.  Notwithstanding, it is still the most numerous tiger sub-species.

The Bengal tiger is a powerful killing machine.  One reported kill demonstrated this power when a Bengal took down, killed and dragged away a gaur  –  the largest living bovine.  These beasts weigh over a ton, so that’s quite some feat.  Bengals, like other tigers, hunt at night, killing their prey by severing the spinal cord, via a bite to the nape of the neck, or suffocating the prey by a bite to the throat.  Death is usually quick and painless.  Once dead, the prey is dragged to cover for consumption.  Tigers can gorge their way through sixty pounds of meat in one go.  If any is left, they cover the kill and save it for later.  Not known for their efficiency in hunting, they need to get as much down as possible before the next meal, which may elude them for several days.  They also have the longest canine teeth of any extant big cat, three to four inches.

They are swift runners, excellent swimmers, hugely successful climbers and can leap great distances of over thirty feet.  Like domestic cats, they purr.  Purring can either denote happiness or pain.  Their almighty roar can be heard over a distance of two miles, allowing for communication with other tigers.

The largest of all living cats, there is no doubt these animals are a considerable size.  The male of the species can grow to ten feet in length and weigh up to six hundred and fifty pounds.  The females are slightly smaller and less heavy.  The unique appearance makes the tiger instantly recognisable. It has an orange coat with black stripes (no two have exactly the same stripes) and white patches on the face and neck with a white underside.

There is no specific mating season for tigers, it’s an all year round event, but November to April seems quite popular. The gestation period is one hundred and three days, after which a litter of up to six cubs are born.  Sadly, there is a very high mortality rate within the first year of their lives.  Those that do make it will stay with their mothers until they are about eighteen months old.

Habitat
Both tropical and subtropical rainforests, deciduous forests and scrub forests, alluvial grasslands and mangroves.
Where
Most are found in India with lesser populations in Bangladesh, Nepal, Bhutan, China and Myanmar.
What they eat
Larger prey such as deer and wild cattle, and smaller hoofed prey including antelope, wild pigs and boar.  Though not strictly part of their natural diet, they have also been known to eat humans.
Threats
Poaching:  The tiger has been slaughtered for centuries because, according to the tenets of Chinese medicine, their bones and other parts have extensive healing properties.  As a result they are in high demand.  Skins are traded on the black market and fetch a considerable amount, as do the body parts.   Habitat loss due to illegal logging and plantations building is also playing a large part in their dwindling numbers.  Human/tiger conflict arises frequently.
Status: Endangered
The Bengal tiger (Panthera tigris tigris) is listed on the IUCN Red List of Threatened Species as Endangered, and on  Appendix I of the Convention on International Trade in Endangered Species of Wild Fauna and Flora  (CITES).   In the 1970s game reserves were created.  These worked well for a short period of time and numbers became more stable. But, the potential profit involved in poaching is so great, it took hold once more, putting the Bengal at risk again.  Unless extensive and robust support is put in place, this species will no longer survive in the wild.   The World Bank is currently, amongst others, addressing this and making a significant contribution to the future of tigers in general.

Recommended reading:   As Tigers Near Extinction, a Last-ditch Strategy Emerges